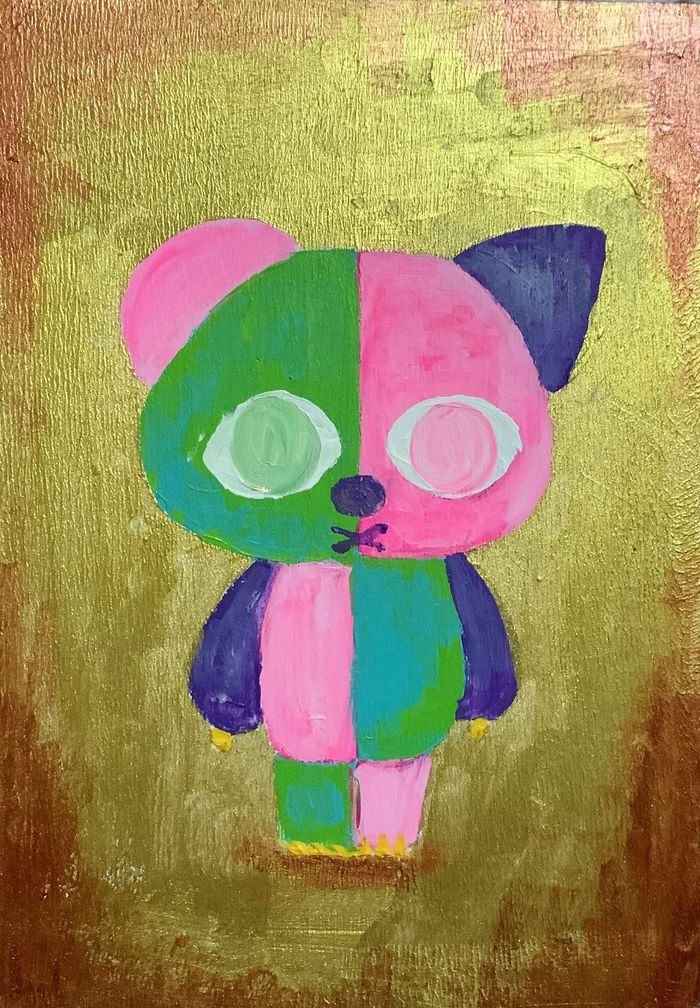 The half bear and half cat “Bear & Cat”, originally a bear and a cat ceramic ornament, broken in half, connected to each other by chance. “Bear & Cat” gaining energy from grass and flowers of the Earth. There is a soft vinyl figure born from this work.

Based in Tokyo, Japan

Muu Nanahoshi has exhibited at art museums and galleries inside and outside Japan, winning vari-ous awards.

Her 2D and 3D works come from her unique worldview.

The world is connected — to communicate this message, she paints all large works connectable when aligned.

In childhood, taking her house, wood, stones and the street as canvas, Muu absorbed herself in painting with pen, stones and wood chips. Every day, she had dreams as magnificent as movies in which characters and worlds emerged out of her unconscious where there was no boundary between reality and dreams.

Muu uses her world of dream and reality in her unconscious and  daily feelings as core, contemplates upon dream, ideal and reality and the past, present and future with her original view, mingles with her inner hardships, joy and sorrow, painting the world, letting it generate through her original filter.

At present, Muu expresses life and the Earth and the human world, painting milk, sea, sky, stars and the moon. “Strawberry Goldfish,” “Strawberry Daifuku,” and “Flowers” are her main icons, painting people she has met and daily feelings of the ordinary and extraordinary.

With her unique worldview, she paints reincarnation and parallel worlds as she desires.

Some lives look like the sea and others the sky.

Death of lives, hatred and various emotions give birth to “Flowers”. From “Flowers,” “Milk” is born. “Milk” gives birth to “Strawberry Daifuku” from which “Strawberry Goldfish” is naturally born to purify suffering and hatred.

“Strawberry Daifuku” shrinks and disappears after purification is complete. The sorrow becomes the tear of milk, which also purifies the world.

The rabbits, chihuahuas and cats born from “Milk” and “Strawberry Daifuku” living there are depicted as the sole creatures that can take an objective view on the world.

Muu also creates 3D and soft vinyl figures of these chihuahuas and cats.

Original handmade goods such as teddy bears and pouches can be found at shops and events in Japan.