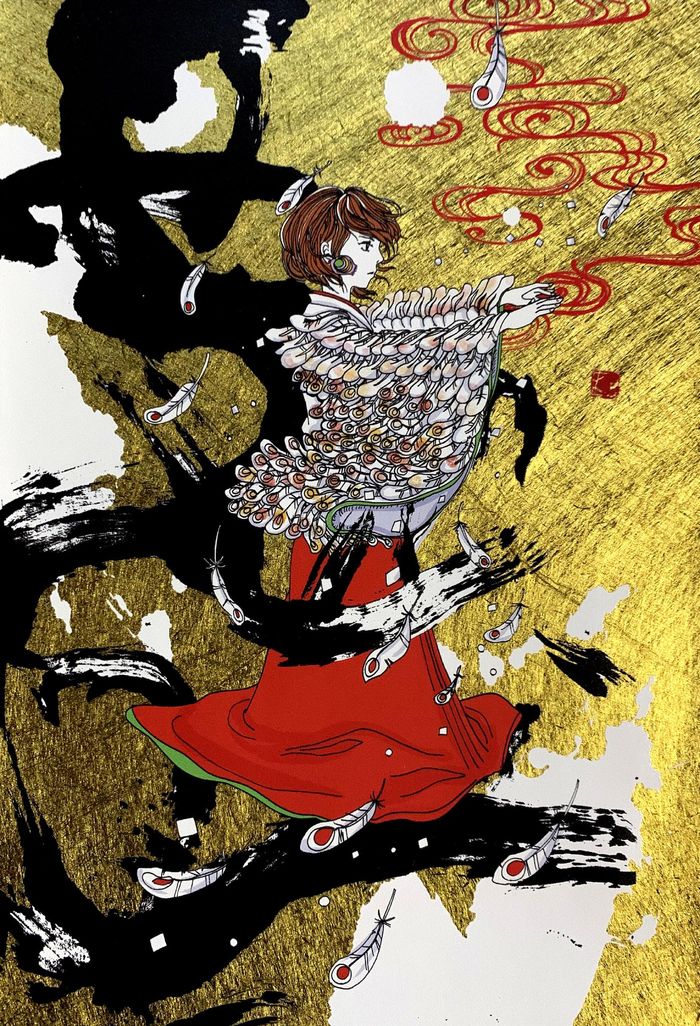 A new genre opened by combining art with calligraphy, one of Japan’s beautifully rich cultures. These are works that can only be produced by Wazen, the artist, who has made it her job to pursue calligraphy and draw pictures. Wishing to “communicate the appeal of calligraphy to the world”, she takes a variety of approaches as she maintains the harmony between the delicate lines of illustration and the majesty of calligraphy. By composing the data of illustration with the characters, she expresses a layer that could not be expressed on a single written page. The beauty of the gold in the Japanese paper on which her art is printed adds splendor to her work, a feat that cannot be achieved with paint. Enjoy the world created with the written character, the art and the beautiful technique of Japanese paper manufacturing.

Born in 1985, she was raised in a quiet area in Nagano Prefecture, surrounded by nature. As a child, she became attached to drawing pictures and reading books, and was largely influenced by comic book artists such as Osamu Tezuka and Akira Toriyama. Since her first lesson in calligraphy at the age of 8, she became devoted to the art and continued its pursuit into college. Following her graduation, she achieved her dream of working at a publisher. There, she became a designer and illustrator of books. After 8 years, she picked up the brush once again and strongly felt life when she drew her calligraphic line. Since then, she has walked the life of an artist.