Important Notice: We are committed to providing you with a safe environment to do business, in accordance with all the health & safety guidelines set out by the local authorities. The event will be delivered with strict standards of health & safety precautionary measures including temperature screening, social distancing, contactless transactions and hygiene protocols. Learn More

Idriss B at World Art Dubai

Home > What's On at WAD? > Idriss B at World Art Dubai

Idriss B at World Art Dubai 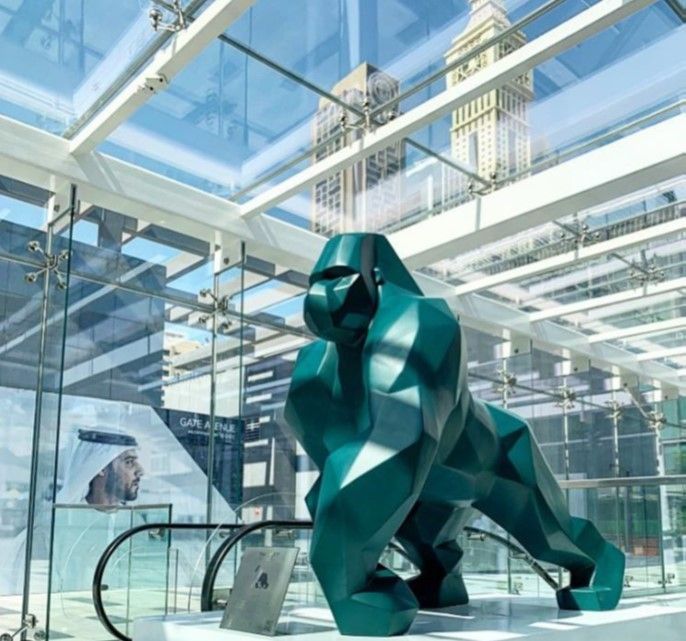 World Art Dubai will be home to incredible sculpture art, including Idriss B, the French-Tunisian sculptor, who is famed for his limited-edition animal sculptures, distinguished by their life-size proportions and polygonal form.

He was born and raised in France during the 1980s and has a mixed background, with multiple influences - he moved to Asia at age 18.

The 1980s saw the beginnings of video games, he believes part of his artistic influence comes from this.

With his artworks featured across major destinations in Dubai, including DIFC and the Palm Jumeriah, the artist is becoming a household name in the UAE’s art scene.

Who are you?
My name is Idriss and I am an artist doing origami/polygon style sculptures.

Where do you come from?

My mum is French and my dad is Tunisian. Born and raised in France, I moved to Asia at 19 years old.

Your influences?
Being born in the 80s in France and with a mixed background, I had very various influences.

It was also the very beginiing of video games and a part of my art inspiration comes from there.
Polygons were what we saw in all the games I used to play in late 90s with the playstation.
But also, watching mangas from Japan, doing Kung Fu from China.
I was also in the incredible age of the hip hop and pop culture in general.

Who inspires you?
Jeff Koons, Karl Lagerfeld, Zaha Hadid, eL Seed, Philippe Stark and Virgil Abloh.
Those persons were not just artists or architects but they changed and marked a complete art field they worked into and this is for me the biggest inspiration.

What language do you speak then?
I speak 5 languages, French, English, Spanish, Tunisian and Chinese mandarin.

How did you become an artist?
Oh that came from a long way.
Actually my dream when I was a kid was to be a professional drawing at Walt Disney. It was amazing as when i was a kid they launched Aladdin, Lion King, Jungle Book, I have watched them a hundred of times and made thousands of drawings and sketches based on them.
After that I became interested of architecture in general at high school.
Was supposed to go to a famous French architecture school but it was for interior decoration which by that time wasn’t my cup of tea.

I finally moved to Dubai only last year as I was too busy working on my art pieces. After some months I achieved 3 first pieces of animals and then the rest followed.

What can you say about those pieces?
The idea is to propose something different and that will fit to any house or taste.
A very concrete example: for some people Mojo is their favorite but they don’t like Mojo 2, for some it’s the exact opposite.
Same thing with the colours, the person that will buy that piece does have the possibility to choose almost any kind of colour he likes, pastel, neon, chromed it can literally fit a small pillow in your living room, the car that you have, the chair near your swimming pool, anything.

The style itself is a mix between origami and polygon cut effect. Some other artist got similar style (Veilhan, Orlinski etc) but I always tried to make mines more « cut » and stronger in the feeling.

I made those to represent first of all a feeling that can touch anyone. Calm, Strenght, Speed, they all talk to one or to the other. For me Art is about a feeling, an emotion.

And emotion doesn't mean that you have to love it, but you will definately live it. It is something in our deep inside that turns on our heart. We can see ourself throught the piece and recognize a part of us.

In french we say "Tous les goûts sont dans la nature" which means that everybody likes something different, everybody got his own taste and opinion. For me those pieces are here to create an emotion and show that no matter old, young, tall or small, we can have feel the same emotion in front of art.

Which one is your favourite?
That’s a good question! Actually they all have a certain history and I consider them all like my babies. For some I spended more than 6 months to decide the pose and still I then remade everything from scratch as I wasn’t 1000% satisfied with the result.
There is not one that I prefer the most but I just think some fits better than other in certain space. They all represents me and a mindset I have or had in my life so I do love them all.